This is the first in a series of blog posts about how to build an API-based serverless service in AWS. We want to build a professional, always-online real-world application that is easy to develop, monitor, test, and maintain. The idea is to go away from simple snippets widely available online and focus on the ways-of-working side of things, to offer a developer a fun working experience and have a fully secure system.

Building a basic API-fronted serverless database REST-service is very well described online, for example in this AWS tutorial. In this blog I would like to focus on the convenience of working with a project in an enterprise environment. A good system would have a modular, extendable design, has proper testing and deployment CI/CD automation, easy to monitor and detect problems. I am a big fan of no-nonsense design approaches that allow me to use my time on creating business logic and have little routine overhead. So we keep things lightweight where possible and utilize as much as possible managed services offered by GitHub and AWS.

The system should be easy to work with in every aspect. If writing tests is difficult, for instance, the work will be pushed away and procrastinated. Just to be honest: it is sometimes psychologically hard to see "real value" in testing and "new features" sometimes take all the spotlight on the assorted planning meetings. An imaginary "lack of value" plus difficulty to write a good amount of tests is a recipe for disaster: systems with a low test coverage do not usually behave well, create massive negative feedback, and ruin the reputations of everyone involved, not to mention financial drawbacks. In this example, if we make testing convenient and fast to implement, these will not become an obstacle and the convenience pays off by having a better system. In my following blog post, I talk about testing, but I like to stress how convenience, in general, is important.

A disclaimer - what I describe here is one way to do things that come from my personal experience. It is not meant to be a rigid, set-in-stone recipe, but rather something you would, with a critical attitude, adapt to your case.

Here is a typical reference architecture that I employ - it is a quite common situation where CloudFront and S3 are serving static content and API Gateway + Lambda hangle business logic and interact with a database hidden in a private VPC subnet. 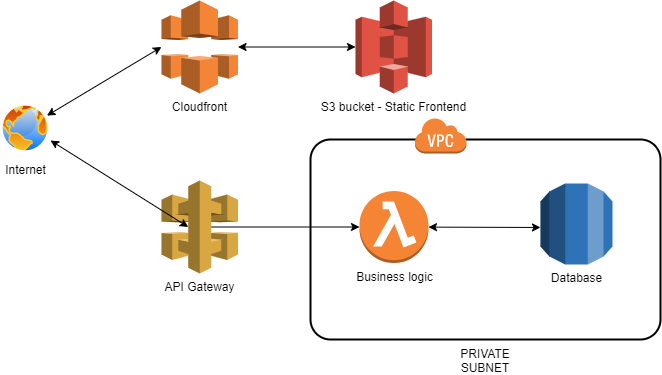 If you try to do it vanilla way, then you got to code many small resources such as copious Security Groups for every bit or, for instance, deploying Glue or Lambda sources to S3. To cut the mundane parts, we heavily rely on serverless.tf library of Terraform modules, which greatly simplifies the creation of complex configurations.

In professional software development, a system usually exists in several copies, or Environments, and interacts with some external systems, which I call Dependencies. The Environment is essentially a set of resources that work together. For instance, preproduction environment resources connect to beta-test endpoints of your Dependencies, and production to the actual Production ones.

This might sound trivial, but the opposite cases do happen from time to time, and it is important that the development team works in environments and insists on the maximal separation from day one.

Terraform Workspace is a way to create the same stack as usual, but isolated from "main" deployment, aka default workspace, somewhat resembling an Environment approach in a "terraform way".

A custom workspace is instrumental in various testing and debugging cases. Suppose you have a client that connects to your production environment, and s/he hits a problem. Surely, whenever possible, you simply want to reproduce the problem in the testing environment (and if that is possible, please go this way). But in a complex system, an error may be only reproducible on production data and under production load. It is seldomly possible to replicate to a testing environment all data and production load patterns across your system and all its Dependences, some of the latter belonging maybe to entirely different company). So you are opening production logs, but alas, they are insufficient and you can not find an exact reason; a natural way to proceed is to add more diagnostics or just isolating the calls made by a single client - it is not an easy task as production systems are typically overburdened by frequent messages from all over the world, so filtering the logs might be very challenging and also very slow.

The following approach probably will not help you with the bugs of performance kind, but allow you to peruse production setup for the diagnostics. See the ajacent blog post How to test a service under production load before going to production to peek into some load testing techniques.

Isolating your production debugging is then possible by creating a dedicated Workspace, the approach resembles the Canary Pattern:

To enable the use of workspaces and avoid clashes with other resource names from the same Environment but different workspace, it is, therefore, necessary to include workspace name as a part of the resource being created; for instance, preproduction environment can be set up by including in your main.tf or other Terraform file a snippet like

Many people are familiar with git flow model and I am also keen to have a similar structure. If a project is simple and modularized, having new features developed in a feature-branch and merged in the main branch (we called ours development) might be sufficient.

We also control our Continuous Delivery using git branches. When we have development, preproduction, and production Environments, we also create the same-named branches. Merging into such a branch means that our Continuous Delivery pipeline will deploy the code in the respective environment automatically. To ensure that unverified code does not end up in Production, we make sure that:

The easiest way to have a lightweight yet powerful CI/CD implementation is to utilize GitHub Workflows and actions. Various workflows can be triggered manually, upon pull request, by start or end of another workflow, and so on.

And of course, we always run a whole set of automated tests in development and preproduction testing Environments, and code must be promoted from one to another in order. Definition of done includes mandatory test coverage for new code created, and these tests must be supplied together with the new code, not much later.

To keep things in sync between environments, we utilize the modularized approach. We utilize the following git repository folder structure:

We create a "main" Terraform Module under terraform/modules/infrastructure-main that takes environment name as one of its parameters parameter and creates all AWS resources.

README.md of course tells a developer to start looking from terraform/modules/infrastructure-main.

Ways of working are important

Any however well-thought technical system is not functional if a team lacks "soft skills" and ways to establish a safe, productive, and frictionless working environment in an organization. It is a major topic indeed, but here I just refer to some of my favorite texts: