__[Last blog](https://www.futurice.com/blog/serverless-camunda-terraform-recipe-using-cloud-run-and-cloud-sql) I showed how to run Camunda business process management engine using Terraform in a serverless environment. The next job is to delegate work to external serverless microservices for implementation. The challenge is doing so *reliably*, with at-least-once delivery semantics, in an event driven manner. __

Interesting, Camunda discourages the event driven push approach, and instead recommends external tasks pull from the workflow engine. Pull, however, does not follow the grain of modern event driven serverless architecture. I spent some time to figure out how to get reliable at-least-once event delivery to-and-from serverless Camunda, using managed Cloud infrastructure, and discovered a fair bit of nuance along the way. Code is public.

It's cheaper. It's more secure. It's easier to operate.

Pull based external tasks are against the grain of FaaS's event driven architecture. Camunda recommends that external tasks periodically pull for work. But periodic pulling prevents the engine from scaling down to 0, and thus nullifies a big driver of cost savings.

Push delivery of messages allows scaling of downstream in response to workload. It enables elastic architectures which can scale horizontally and down to zero. You need a push driven architecture to host code in functions-as-a-service, which have their own long list of advantages.

However, it is tricky to get right, which is why I think Camunda suggests avoiding it. The main challenge is delivering messages reliably, i.e. at-least-once delivery mechanics. Building at-least-once message systems is hard, luckily our cloud providers have done most of the hardwork and we just have to know how to exploit them.

I did not want to dive into custom Java code for this project. It makes it hard for people to replicate. So I set a goal of using only out of the box functionality. Before we get to a concrete example though, we need some basic building blocks. 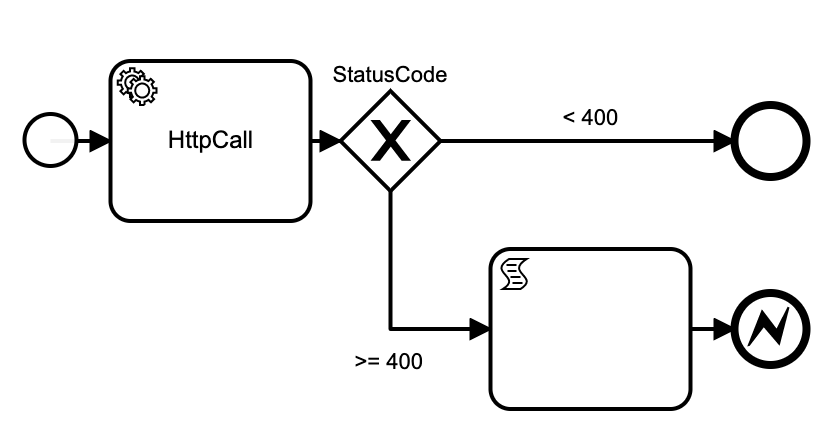 For at-least-once delivery, transient failures must be retried. We wrap the http-connector plugin with a decision based on the response code. Google cloud often throws 429's when a system is still scaling up, so you should retry those. You probably shouldn't retry 400s, but this is an MVP so I kept the diagram simple. By terminating the process with an Error, Camunda's retry logic can kick in to callers of this activity.

Publishing to pubsub's REST API requires a Bearer token in the Authorization header. Cloud Run can fetch a token for its active service account via a GET to the metadata server. So publishing can be achieved with two REST calls. 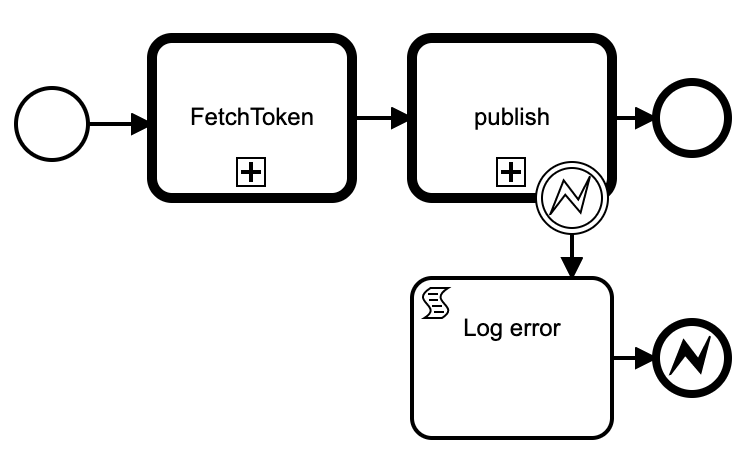 We don't really need to catch the error, but it's informative to print it out (the failure could be non-technical like a quota problem and you really want to see those)

The default wait for message task allows external tasks to POST a message to the engine to kick off processing. The default implementation is enough for our needs.

To figure out if we can do external at-least-once delivery with response semantics, we deploy an external Echo service that responds by posting a message back to the Engine. This requires reliability in the face of outbound transient errors, and reliability in posting inbound messages back to the engine.

We use Pubsub as the outbound transport because

We deploy a simple echo service in Google Cloud Functions that POSTs a received pubsub message to a URL.

Camunda will respond with status code 200 when it accepts a message, or 400 if it cannot route messages (this happens if the same message is delivered twice).

For at-least-once delivery we turn on automatic retry logic for this function. Note if there is a network hiccup we might not always be notified of the delivery success, in which case the function will retry and the second delivery will get a 400. So a few rare 400s are expected, and thus should NOT be retried.

With the function deployed, we can now trigger it by publishing to its topic, and we can listen for its results by setting up a Message receive task. 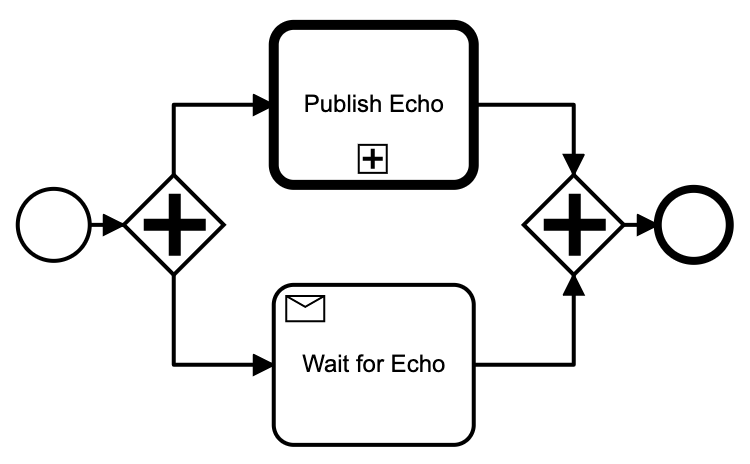 While the diagram is notionally simple, there is a fair bit of engineering details hidden in configuration

I had a few implementation gotchas I hit when developing

Testing: Is It Really at-least-once delivery?

To test reliability I connected the Echo task in a loop. Once started, it should just keep retriggering itself. We want to check that the causal chain of self-triggering is never broken, even in the face of transient errors. Another common failure mode is the processes start multiplying, when we want exactly-once processing semantics. 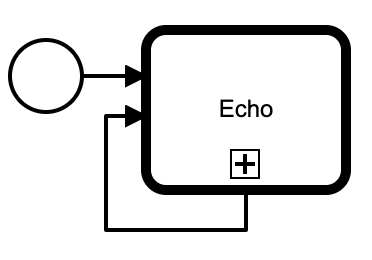 BTW this loop test was how we tested Firestore and Realtime Database integrations with Google Cloud Functions. It's a brutally sensitive test when run for months (especially though platform outages!).

This loop survives reploying both the Echo and Camunda services! Here are the graphs of it running overnight, and you can see patches of errors at various locations that it survives. 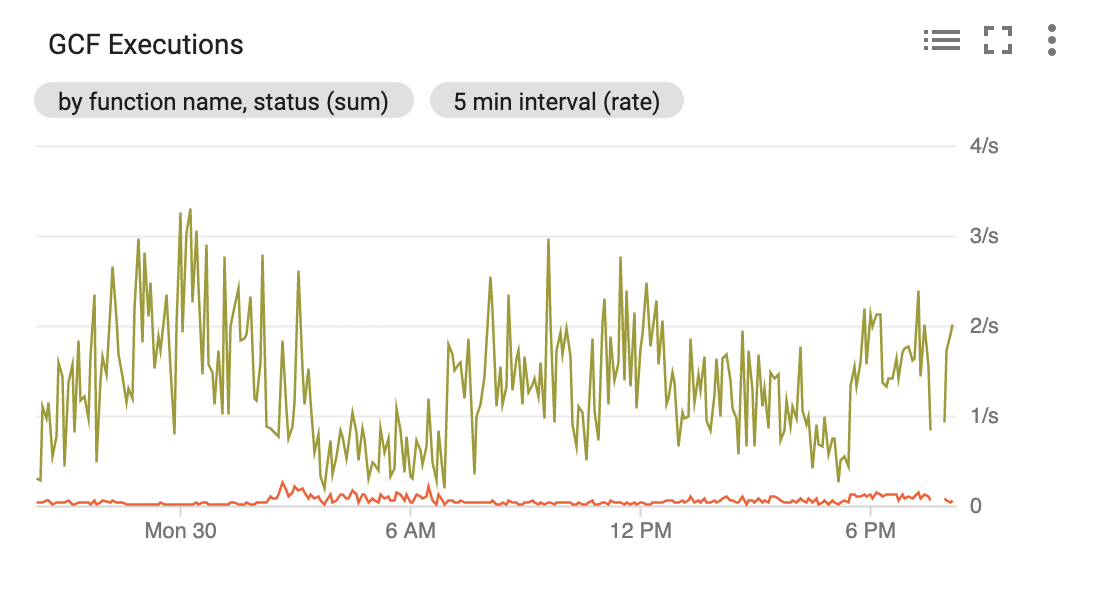 We even captured the cloud run service being scaled to zero and waking up and carrying on: 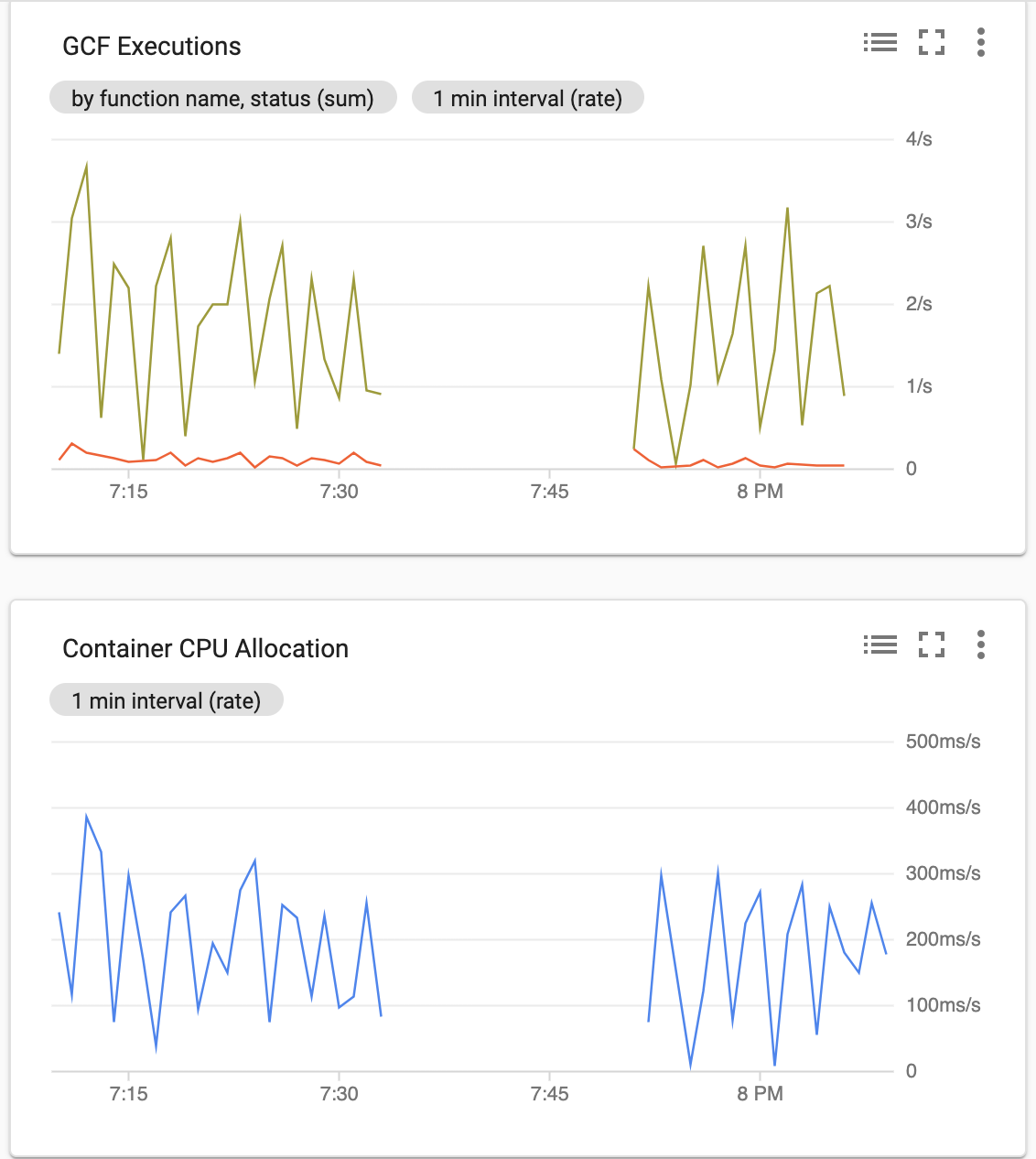 Round trip latency was around 500ms, despite our woefully under provisioned shared f1-micro Cloud SQL database instance.

We added the ability to configure the bpm-platform.xml in our futurice/terraform-examples repository mentioning the previous "Serverless Camunda Terraform Recipe" blog. All the code in this blog is availible here.

This experiment demonstrates we can run external tasks, and collect their responses reliably using PUSH delivery semantics. This is bidirectional information flow, orchestrated by the engine. We achieve this using out-of-the-box functionality -- I never even had to write a retry loop! This communication pattern fits serverless computation perfectly, and allows the downstream tasks to scale to demand automatically. Furthermore, the engine itself scales horizontally too.

This pattern will allow external services to be written in whatever language makes sense, and run in their own service account for minimum privileges, and scaled independently to the process engine. We have decoupled task execution and implementation from task scheduling and workflow design.