Twitch - the MTV of the gaming generation

Introduced in 2011 and acquired by Amazon in 2014, Twitch has quickly become the gold standard in video game live streaming, and a popular platform for various other types of streamed content. At the heart of the Twitch community are its 2.2 million broadcasters, thousands of which stream titles like League of Legends, Overwatch, Hearthstone and Fortnite on a daily basis – in front of an audience of 15 million daily viewers.

As many as 27 000 video creator partners make money from their videos. Those are big numbers. The bulk of their audience is from the 18–34 age group, so this is by no means a teenage fad. Competitors are relatively few and far between, and they have a hard time trying to keep up.

Twitch offers a platform that allows content creators to reach their audience with ease and, thanks to its recently revamped monetization scheme, enables a growing share of the streamers to also make money from it. Advertising is pretty much an integral part of Twitch streams, with the most dedicated fans willing to pay tens of dollars just to support the work of their favorite streamer. For the vast majority of businesses or social platforms, loyalty like that is nothing short of a pipe dream. 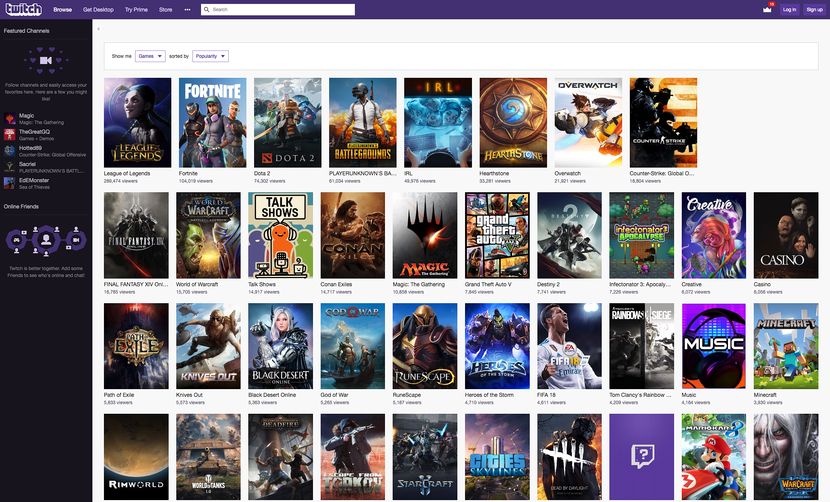 For a relic from the Music Television era, such as myself, the most natural way to evaluate new cultural phenomena is to compare them to – you guessed it – MTV. MTV was the first one to successfully build a (loose) global community around young people’s passion for music, and so throughout the 80s and 90s, music was the common denominator that brought teens and young adults together. Video games had their devoted fan base at that time, too, but due to several factors, including their subject matter and the way they were marketed, the vast majority of consumers viewed them exclusively as a thing for kids. Casual gaming in its current form didn’t really exist yet for the adult demographic, so for them, playing games carried a social stigma.

Thankfully, that notion is now largely in the past. As a direct result of the rise of casual and mobile gaming, all of a sudden games and gamers are found... well, pretty much everywhere and in all age groups. As gaming has become mainstream, Twitch has become the MTV for the gaming generation. Today, game companies introduce their new titles with interactive live streams – played by members of the developer team itself. The level of community interaction is on a level many companies could only dream of earlier.

Twitch is also becoming a threat to incumbent live streaming services like YouTube, Facebook Live, and Periscope, all brands owned by some of the largest names in the tech industry. Just when you thought the bulk of the live streaming business was already distributed between these giants – boom – a new niche contender emerges out of nowhere and starts gaining ground. Even prominent YouTube stars like Casey Neistat have expressed views that YouTube is in fact vulnerable to Twitch. And within the gaming domain itself, Twitch has a growing user base whereas YouTube Gaming is actually shrinking.

But its impact is not limited just to the platform business. Twitch, and the whole live streaming culture, has been a substantial driving force behind some significant changes in game design. Multiplayer has been a staple for years or even decades depending on the genre, but now various developers have started to prioritize multiplayer over single player, or even abandon the single player component altogether – even in massively popular and valuable IPs like Call of Duty.

Streaming has also contributed to microtransactions becoming more commonplace and gaining foothold on consoles. Fortnite, for example, is free to play on all platforms, but on mobile alone, its add-ons are grossing more than titles like Candy Crush Saga and Clash of Clans. The interesting part is that they are simply cosmetic upgrades – there are no controversial loot box gambling schemes or items that boost your in-game performance or character development. It’s all about enabling dedicated players to customize their own experience and reflect their own personality. These in-game purchases – most notably the victory dance animations – have also become a popular subject of fan-made Youtube videos. Much like Nokia phones’ ringtones at the turn of the millennium, the dance animations have become a thing not by design but by some other force that every product manager on the planet would be willing to die for.

When famous streamer Ninja set out to play Fortnite together with rap artist Drake, the two reached an audience of over 600 000 viewers. Numbers like these rival many prime time TV shows – and in 2018, someone streaming from their home with an interesting enough guest line up can reach them. Humbling moment. A while later, NFL star JuJu Smith-Schuster and rapper Travis Scott also joined Drake and Ninja for a squad game. The chance to combine the fan bases of NFL, Hip-Hop music and eSports into one stream would be any marketing professional’s wet dream, and its combined impact is enormous. There are other, older examples of celebrity gaming stunts, for example Conan O’Brien’s tongue-in-cheek video game sessions with celebrity guests, but that is a completely different case. Pop culture crossovers like this have never been seen before, and in the future, this domain is only going to grow from what we've seen so far.

It is also worth mentioning that Fortnite was inspired by another game, PlayerUnknown’s Battlegrounds, or PUBG – so much so, in fact, that the creators of the latter initially considered taking legal action against Fortnite for replicating their IP. The major superficial difference is that Fortnite has a much more cartoony visual style. Within the streaming community, Fortnite is already drawing more than twice the viewer counts that PUBG is attracting. It should also be noted that Fortnite costs nothing to play, while PUBG sells for approximately 30 EUR/USD.

What's in it for me?

When acquiring Twitch, Amazon already saw this coming, but countless other companies have been completely blindsided. They missed the platform train, and most of them are now depending on the ones that eventually divide the market for brand visibility. The entire video game live streaming business has turned out to be a much bigger revolution than anticipated: eSports is now a legitimate profession. In Finland, schools are actually offering courses on eSports and instructing on how to gain sponsorships. And quite a few Finnish players can now be found in top tier professional Overwatch teams.

As with most emerging platforms, the gains can be enormous, but the same applies to losses as well. At this point, Twitch is providing good value for companies with the right message. However, the community is highly critical, so your message needs to be authentic and meaningful to the audience – otherwise they will just resent it, and maybe even turn it against you.

Twitch is an immensely entertaining platform. If you haven’t yet, I really recommend that you check it out on your preferred device. Spend an hour or two just browsing thru the streams (late evenings and nights in Europe are usually the busiest times, since a good chunk of the most popular streamers are based in the US). Try to get a feel of the community and figure out what motivates people to stream their gaming sessions, what constitutes and entertaining stream, what drives the fans to voluntarily donate money to the content creators, and how it all ties together.

When you think you’ve gotten your head around this pop culture phenomenon, don’t stop there. The important part is figuring out whether these paradigms could support your daily work or benefit your business. The victory dance comes after that.