Laura is a Senior UX Designer and based in Munich. Moving from Colombia to Germany to pursue her career goals has not only opened her eyes for societal matters but also given her a new perspective on her design work.

I see myself as a facilitator helping people to figure out what they really want and need. Because I am convinced that deep down, people know it already. As a designer – equipped with the necessary tools – I help them to realize it themselves. It took time to learn that my work is not only about my ideas and creativity, it is foremost about the users’ needs and wants. 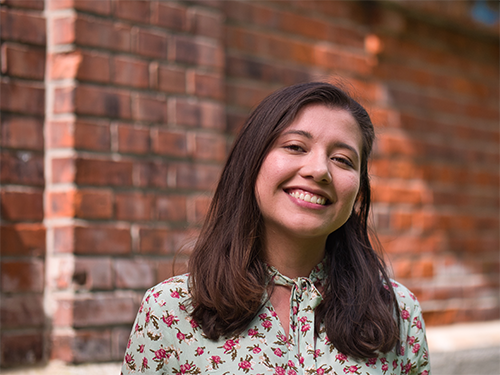 What originally made you want to become a designer?

Initially, I wanted to study Marketing in Colombia where I graduated from high school at the age of 16. The studies turned out to be too much about talking people into buying things, so I chose a somewhat more creative major: Interactive Media Design. My mum disapproved of dropping out, so I found myself enrolled in a Marketing and a Design degree at the same time. Today, I admit that it is the combination of the marketing perspective and the design knowledge that enables me to create good, problem-solving tech platforms and makes me a successful UX designer.

Who or what has been the biggest influence on your way of thinking?

I would say: my perspective as a foreigner in Germany. Coming to Germany has been the greatest opportunity of my life, but being far away from home comes with mixed feelings, too. I had to learn to choose what feelings to embrace and what to let go off and to unceasingly reflect on my current situation. Taking time for reflection has even more so opened my eyes for all people and their diverse needs. I truly believe that diverse ideas create better products. So I came to really appreciate my team – people from different backgrounds with different perspectives. The diversity fosters empathy for people, accessibility and inclusion – reflected in our design work.

How would you describe your approach to design?

I see myself as a facilitator to help people to figure out what they really want and need. Because I am convinced that deep down, people know that already. As a designer – equipped with the necessary tools – I help them to realize it themselves. It took time to learn that my work is not about my ideas and creativity only, it is foremost about the users’ needs and wants.

Besides being a designer, you are very engaged in our D&I activities. What does D&I mean to you?

I started to engage in feminism when I moved to Germany. I was frustrated to see so many things go wrong in society and felt excluded myself. Somehow it took me travelling halfway around the world to realize the injustices that exist anywhere in the world. By now, I learned that I don’t need to fit into society’s idea of a submissive woman to be taken seriously. The best things in life happen when I am not trying to be someone I am not. That includes finding a partner who wholeheartedly supports the same ideals and respects me as an equal.

So, feminism is not only about women but about all people feeling excluded from society. To me, D&I is about perpetuating that no one needs to feel any kind of discrimination or exclusion just because of the way they were born.

One day, I managed to add a design perspective to my anger: people don’t do things out of bad intentions, but because they were taught to do so. As a designer, I know I cannot change the world as it is, but I can solve one problem at a time. So I reach out to people, I foster conversations about D&I, I join forces with people who feel the same way and we fight against inequalities together.

What should be said out loud more often?

Three simple words: I love you. It may sound cliche, but it is so important. I think we should care about each other more and also show each other. In Spanish, we usually distinguish between the expression ‘Te amo’ for lovers and ‘Te quiero’ for friends. However, I tell all my friends ‘Te amo’, as I am not afraid to show my affection.

It’s 2120. What would you tell future Futuriceans?

When the founders were asked what Futurice is about, they said ‘It’s a one hundred years metamodern experiment’. At the time I didn’t really understand the term, but I get the sense of it now: Futuriceans are always encouraged to try new things and not be afraid of making mistakes. What I would add then: ‘The experiment is never over.’

If you would like to read more fascinating stories and get to know our people, our sites and the community better, check out our One Million FutuStories Booklet.